Posted by AJ Winterwerp on

THE STATED COMMUNICATION FOR

HAS BEEN CANCELLED BY

YOUR ATTENDANCE FOR THE STATED

My Brothers:  August has come and gone.  September is here, and it is time we get back to work on our Degrees.  We need to confer a Fellow Craft and an Entered Apprentice Degree. Since we only have one meeting in September, it looks like we will confer one in October and the other in November. The merger between Halifax Lodge and New Smyrna is done. It became official on August 31, 2020.  Welcome Brothers of the former Halifax Lodge no. 81 to your New Home. The Grand Master Official visit to the 13th Masonic District was a huge success, our own District Deputy, R.W. Glen E Good, who should be well complimented for a Job WELL DONE. Do not forget Open Books and School of Instruction is the Fourth Saturday of each month at St. Johns Lodge no. 37 in Deland. 8:00 A.M., School at 9:00 A.M.  Till the next time my Brothers, take care of yourselves, and be Safe out there.

Greetings from the West,

I would like to welcome the Brothers from Halifax on the Merger to New Smyrna. Come out and get involved. You are part of New Smyrna Lodge. On August 17th, we had a Master Mason Degree for Brothers Moe and Powell. There was a great turn out. Eastern Star did a great job on the dinner. The Grand Master was in attendance also.

September 2nd, New Smyrna Lodge is hosting the Masters and Wardens Association meeting. Dinner at 6pm with meeting at 7pm. September 21st, is the D. D.G.M. visit to New Smyrna Lodge with dinner at 6pm and the meeting at 7pm. On the menu is Meatloaf, Mash Potatoes and Green beans. If you are unable to drive and would like to come to Lodge let me know. I will see about getting you a ride to the Lodge and home.

FROM THE SECRETARY’S DESK

Brothers from Halifax 81,Welcome to New Smyrna Lodge No. 149. This Trestle Board has your birthdays for the month but not the Perpetual, 50+ year exempt and Past Masters of Halifax 81. I plan on having these items in the next issue. Any questions please call the Lodge at 386-423-2370 or email me at: NSL149@cfl.rr.com. We are trying to send out most of the trestle boards by email to cut the cost of mailings. Please drop an email to the lodge with yours and I can add it to the list. Also, email is one of the best ways to get a quick response. I check the lodge email once a day. There is also a letter going out to you all to update your information, and for me to check that I have entered your information correctly. I am looking forward to sitting in Lodge with you all and working with you all also. For those of Halifax Lodge 81 who have not paid your 2020 dues please do so. The dues amount will not change until 2021. Please send all your correspondence to New Smyrna Lodge No. 149 and make you checks out to New Smyrna Lodge No. 149. The Mailbox for Halifax Lodge No 81 is being cancelled and all mail is being forwarded to New Smyrna Lodge and the bank accounts are also being closed out for Halifax 81.

Brothers, for those who have paid you dues, thank you. For those who have misplace the dues notice or cannot remember if you have paid your dues please call the Secretary and I will check and let you know if you have or have not. For those Brothers who want to pay with credit card PLEASE call me at the Lodge number and I can enter the information for you. We are having problems with Circumscribe. It is not that the money does not get to us but that we have no record of who pays through Circumscribe. They have stopped the weekly emails with the Brothers names and amounts paid. Grand Lodge is aware of the situation and is trying to correct it. Every time we get the bank statement with a payment from circumscribe, we call Grand Lodge and complain. If you pay though circumscribe, please drop an email to me so I can send you your dues card and mark you as dues paid. 2021 Dues notices will go out after October 15th, 2020. This is so Grand Lodge can complete merging Halifax’s membership files into New Smyrna membership files. Please do not send any money in until you receive the dues notice.

Congratulation to Brothers John Wyatt Moe and Walker Edwin Powell who on August 17, 2020 were Raised to the Sublime Degree of Master Mason. There were 45 Brothers in attendance for the degree along with the Grand Master of Florida who Raised one of the Brothers. 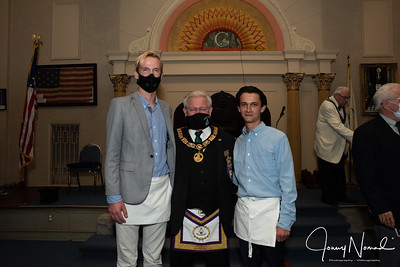 The Resolution for Halifax Masonic Lodge No. 81 to merge with New Smyrna Masonic Lodge No. 149 was passed with by a ¾ majority secret written ballot by New Smyrna Lodge. The merger between the 2 Lodges has taken place August 30th, 2020. WELCOME TO ALL ARE BROTHERS FROM HALIFAX 81.

A copy of the Grand Masters letter is below:

Re: Merger of Lodges

Dear Brethren: I, as Grand Master, have reviewed the Merger Plan for New Smyrna Lodge No. 149 and Halifax Lodge No. 81 and give my approval for this Merger to take place. New Smyrna Lodge No. 149 to be the continuing Lodge and the merger to take place as of August 31, 2020. Per Regulation 16.04 (g), Halifax Lodge No. 81 shall surrender its Charter to the Grand Lodge and deliver the Charter to the Grand Secretary. We would caution both Lodges to be certain that all property, if the Lodge owns any property or assets or bank accounts, be transferred or sold or disposed of before the final merger. Once the merger takes place the Officers of the old Lodge can no longer sign for the Lodge and it becomes a burden trying to tie up all the loose ends. Be advised that all documentation relative to finances and real property and transfers of the same are to be reviewed by the Grand Lodge General Counsel for recommendation to the Grand Master for approval. While we are saddened that the Lodges are diminishing, we congratulate you for taking this bold step to bring together the resources of these two bodies for the benefit of Freemasonry. I want to wish the two Lodges much success in this merger and that the resulting Lodge will flourish.

Keep in your prayers the family of Brother Walter C. Johnson who passed to the Celestial Lodge above August 13th, 2020. Brother Johnson was initiated on 5/18/1981, Passed on 7/28/81 and Raised to the Sublime Degree of Master Mason on10/17/1981. Brother Johnson was a 39-year Mason. Keep Brother Glenn Smith (Chaplain) who has had a heart attack,  Please keep our Brothers who are now lock-ins due to the recent events and all our Brothers who have been or are sick that we don’t know about. Keep all our service personnel deployed and at home along with all first responders in our hearts and prayers. Contact the secretary or Chaplain with Brothers who are sick or distressed so we can put them on our prayer list.

Why is it called BLUE LODGE?

The question always is ” Why is it called BLUE LODGE?” Here is some inside in this subject from my research.
Why have we adopted blue into the lodge name?  Where does it come from?  What does it represent and mean?
The mother of all Freemasonry.  The place where every man begins his journey into the Ancient Craft of Free and Accepted Masons. “The Blue Lodge” – It has been here in America that the term “Blue Lodge” has become popularized and so widely used.  Originally, it was frowned upon, and Lodges were called, Craft Lodges or Ancient Craft Lodges, some were even called a St. Johns Lodge. According to Coil’s Masonic Encyclopedia, there may be a number of reasons why symbolic lodges are called Blue Lodges. Since ancient times, the color blue has been associated with immortality, eternity, and fidelity. References to the color blue in the Bible emphasize the special place blue has as a color symbolizing goodness and immortality. The Druids also honored the color while the ancient Egyptians used the color to represent Amun, one of their most important gods. The ancient Babylonians associated the color blue with the gods. In Medieval times, Christians saw blue as the symbol of perfection and hope, and well as of immortality and fidelity. It is not known when blue first came to be associated with Freemasonry, although some historians think that initially the color was used in Craft Masonry to represent the sky. Today, blue for Masons symbolizes brotherhood and symbolizes the fact that Masons should seek out virtues as extensive as the blue dome of heaven. Albert Mackey’s Encyclopedia of Freemasonry under “Blue” has further light to share. He says “Blue is emphatically the color of Masonry. It is the appropriate tincture of the Ancient Craft degrees. The Hebrew word for blue when referring to spiritual matters is tekhelet התכלת derived from a root word meaning perfection. It is well known that among the ancients, initiation into the mysteries and “perfection” are synonymous terms and this is why blue is the appropriate color for the greatest of all the systems of initiation the world has ever known, The Ancient Blue Lodge Craft.” Beyond the allegory and symbolism of the color blue, there is the reality of millions of men who have experienced things beyond themselves, transformed and evolved into their highest potentials, reached even further to give the same to other men, while standing in and being a member of a Blue Lodge. It is said over and over again, “There is no other degree “higher” then the third degree and being a Master Mason. There is no higher distinction in our entire institutional Fraternity! ” With that being said, we all should remember, support and love our Blue Lodges, where we began as good men and through the motherly love of our Ancient Craft Lodge, we were brought into the world anew….literally brought from the dark to the light, to rise as GREAT MEN!

More to come next issue